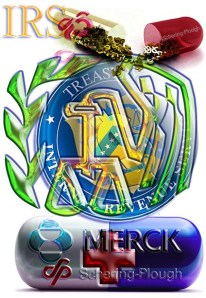 On the same morning that Merck learned it lost the legacy Schering-Plough $473 million tax minimization-by-machination strategy (my prior backgrounder on it), the New York Times made legacy Merck a feature — highlighting the less than stellar record of jobs creation from prior tax holiday repatriations, thus — do go read it all.

. . . .Merck, the pharmaceutical giant based in Whitehouse Station, N.J., was one of those big winners. The company brought home $15.9 billion, second overall to Pfizer’s $37 billion. It used the money for “U.S.-based research and development spending, capital investments in U.S. plants, and salaries and wages for the U.S.,” a Merck spokesman, Steven Campanini, said last week.

According to regulatory filings, though, the company cut its work force and capital spending in this country in the three years that followed.

Merck used the cash infusion to continue paying dividends and buying back stock for the benefit of shareholders and executives — even as it was rocked by more than $8 billion in costs to settle a variety of disputes after executive missteps. . . .

And here is some of the AP’s coverage of the tax appeal loss, at the Third Circuit:

. . . .The Third Circuit Court of Appeals ruled Merck’s Schering-Plough unit was not entitled to a refund of $473 million in taxes, affirming the April 2010 ruling of U.S. District Judge Katherine S. Hayden. Merck, of Whitehouse Station, N.J., had appealed that ruling.

Schering-Plough had argued that funds it received through two transactions involving foreign subsidiaries and a Dutch bank were not immediately taxable in full as proceeds of loans.

Schering-Plough, which became part of Merck in November 2009. . .

The case involves Swiss subsidiaries, Scherico and Limited, owned by Schering-Plough in the early 1990s. They conducted significant manufacturing in Ireland, which then had a favorable corporate income tax, and had earnings of roughly $1 billion not yet been taxed in the U.S.

According to the appeals court ruling, Schering-Plough executed a complex “scheme involving interest-rate swaps” over multiple years among Schering, the Scherico subsidiary and then a third one called Essex Chemie AG, and a Dutch bank. Schering-Plough later reported the transactions as sales and repatriated about $690 million from its subsidiaries.

See my original reporting of it, in August of 2009, right here. In any event, here is the current Fox-Biz story — and a snippet from the legacy Schering-Plough/New Merck item:

During the past year, the Tax Division has continued its civil and criminal enforcement efforts against the promoters and facilitators of abusive tax shelters. Abusive shelters for large corporations and high-income individuals have cost the U.S. Treasury many billions annually, according to Treasury Department estimates. The Tax Division has had great success in federal court defending the U.S. Treasury against tax shelter-related claims of large companies and individual investors, and in prosecuting promoters of these abusive transactions. Among the successes during the past year in this area. . . .